Finding out where you've been

Call me wierd, but I do not like GPS navigation. It has proved usefull when maneuvering unfamiliar cities on the way to a business meeting, but on my private travels I prefer to stick with the oldfashioned fold-up maps.

There are two advantages to using a fold-up map:

I have stumbled on picturesque villages, small town restaurants that presented cullinary marvels, perfect roads between mountain and sea all of which I would not have seen/tasted/driven if I hadn’t taken a wrong turn somewhere.

The fold-up map keeps me in the general direction I want to go, but does not force me down a well known road and will not scold when I make that wrong turn.

I’ve only had one regret all these years:

Some of those marvelous places I have stumbled on by chance…I have no clue where they are.

And that is where I find GPS great.

I’ve searched for a long time trying to find a GPS recording device, something that will store the GPS coordinates of a route and hopefully allow me to load that data on a computer and get a nice map view of my journey.

It needs to be compact and waterproof, battery operated and preferably have a battery-life measured in days.

There are some GPS receivers in USB-stick form out there at the 200-300 euro range, but they are sold as “spy” devices and unfortunately not widely available in Europe.

Some of the high end GPS navigators, especially those catering to the trekking and climbing afficionados will record the route, but these are expensive (on the 600 euro range) and too large for my taste.

It’s a device directed at joggers, a GPS receiver that shows you altitude and coordinates as well as speed of travel, allowing the setting of waypoints and storing the route coordinates.

It can also be used as a GPS receiver plugged into the computer and can lead you back to the start of your route or any of the waypoints you set along the way.

It does what I want it to: saves the route and allows me to load a file with coordinates on the laptop.

It’s battery life is acceptable (it will record a full day’s travel before running out).

It’s resolution leaves something to be desired for motorcycle riders. Doing 130 km/h trackpoints are spaced about 7 km apart making for jumps in the map: 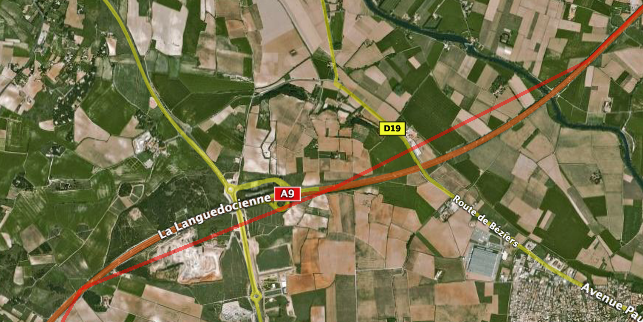 Alas the software bundled with the device is, simply put, horrible. It supposedly can export data in “KML”:http://code.google.com/apis/kml/documentation/ and even start Google Earth and show the routes, but I have not managed to do either of those things getting cryptic error messages (the “it doesn’t work” type). It being Windows-only just adds to the minus points. Typical case of good hardware with bungled software support.

What you can do is get a text file with the route coordinates and the waypoints. It stores (latitude,longtidute) in integer format (meaning you have to guess where the decimal point is).

Yes, that is (latitude,longtidute) not the other way around - what where they thinking?

Converting the text file to KML is trivial once you figure that out. It was funny the first time I assumed (longtitude,latitude) and saw I was driving across the arctic instead of the south of France. The second time it was the atlantic, until I found out the correct place for the decimal point.

Trackpoints are not timestamped and no altitude information is stored, which is a pity since the device does give you that information in real time, but I guess the amount of information stored (as well as the time resolution) are limited by the built-in flash memory.

It’s a very nice piece of hardware for it’s price (you can find it for about 130 euros). Unfortunately at the time of writing the NL-101H has dissapeared from the product list of Navilock, although online stores keep listing it for sale.